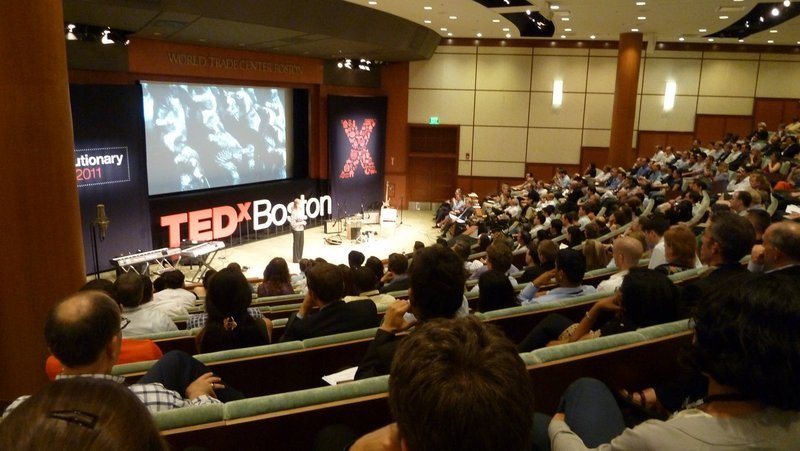 TEDx Boston 2011 was held for the third year at the Seaport Convention Center on Boston's Waterfront. In addition to a packed main auditorium, TEDx Boston added a more casual setting that was simulcast to a second ballroom at the Seaport, and also to a large event held at Google's offices in Cambridge. 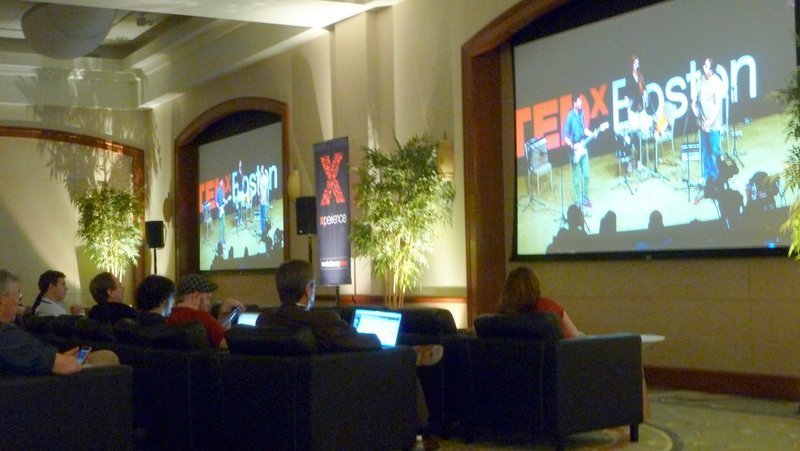 The simulcast room actually had three screens, and tons of comfortable chairs and couches. 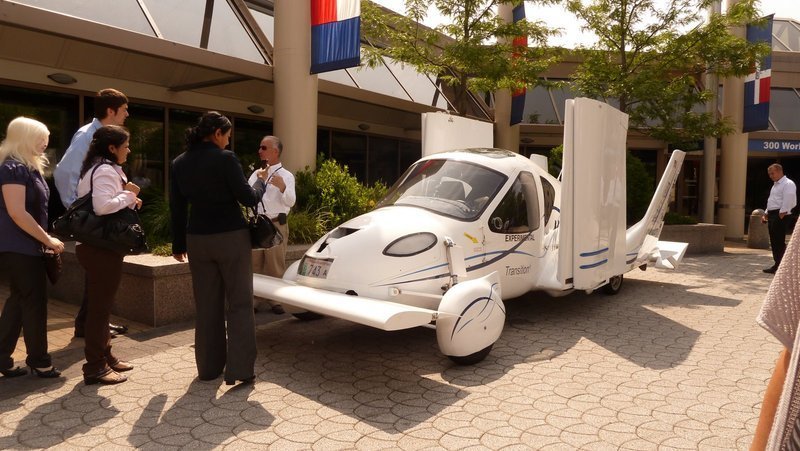 Out front, Terrafugia showed off their Transition "flying car". They have over 100 orders and their production prototypes will be delivered soon. 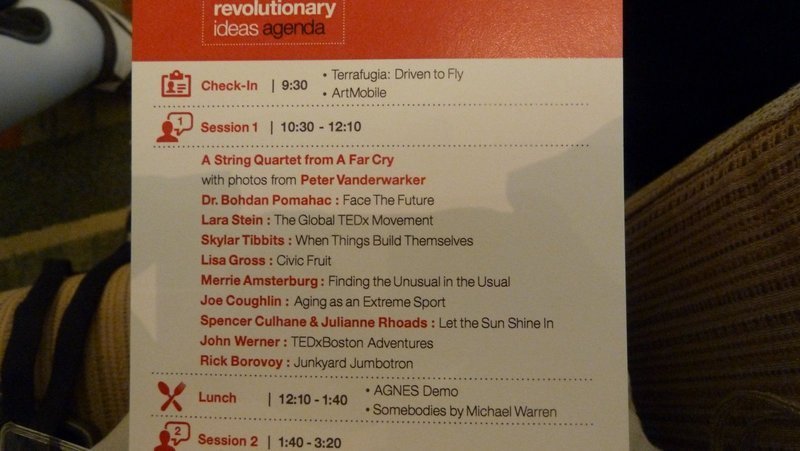 This year, TEDx Boston had three sessions, with generous breaks in between. 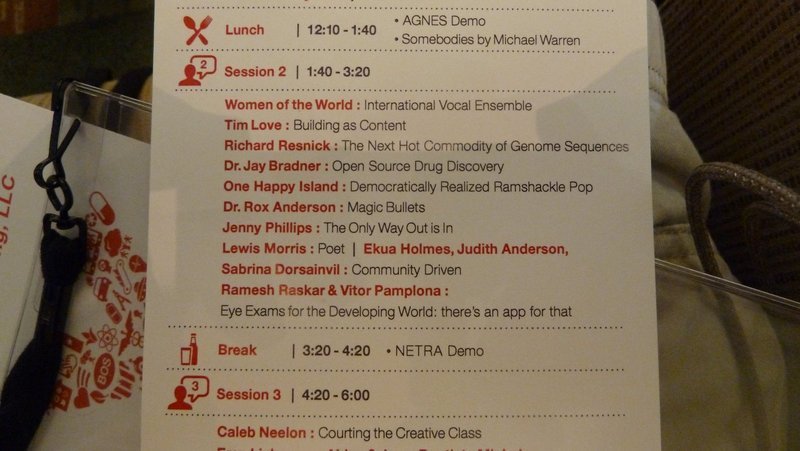 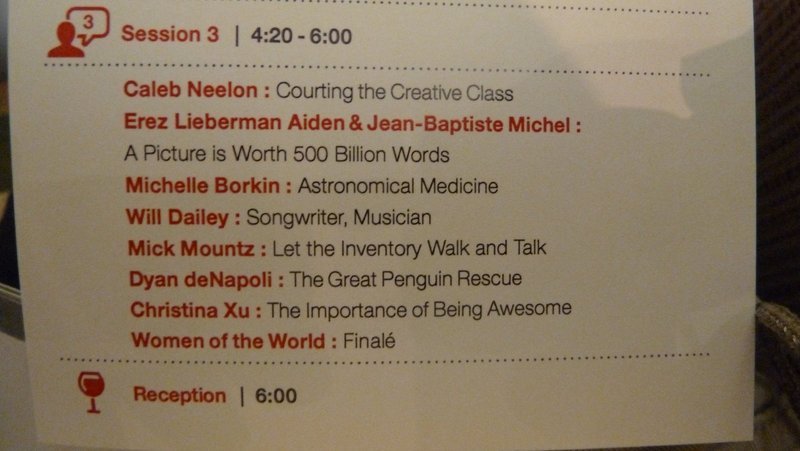 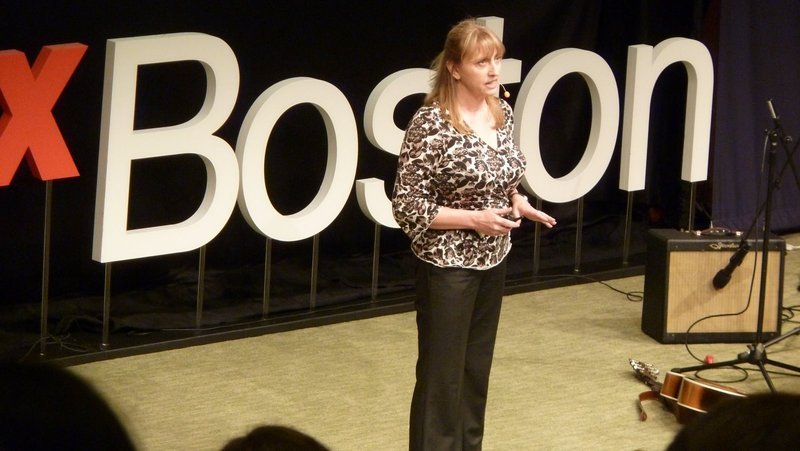 Dyan DiNapoli talked about rescuing 20,000 penguins from a huge oil spill. They saved over 90% of the birds, using 12,000 volunteers. 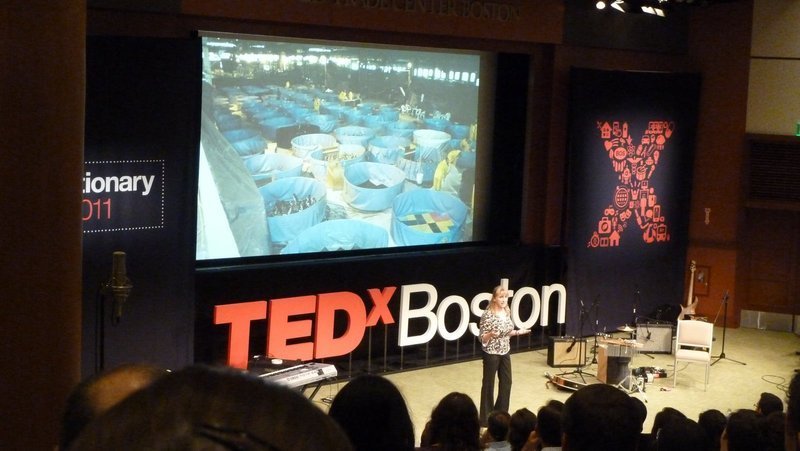 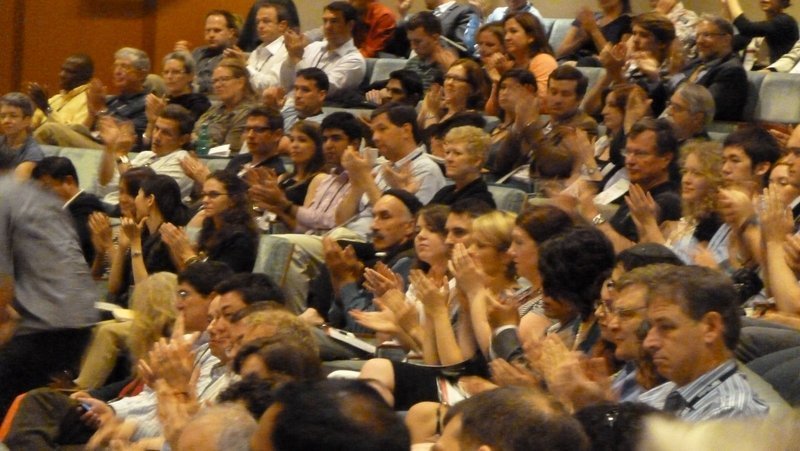 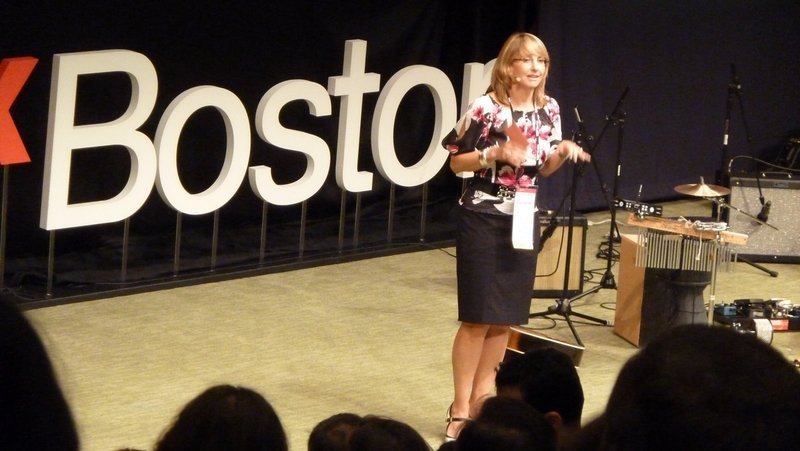 Danielle Duplin introduces the last talk of the day by Christina Xu. Christina's talk was, well, awesome. A great message, delivered with humor, speed and grace. 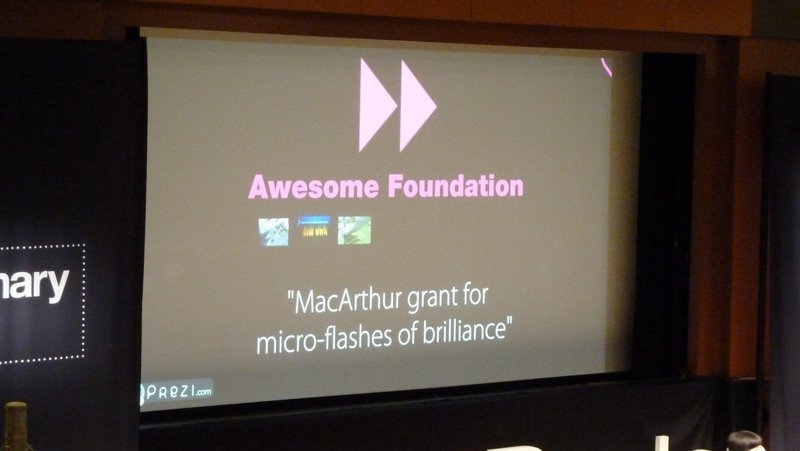 Awesome foundation gives $1,000 grants based on just 7 questions, and a sense of what's awesome. 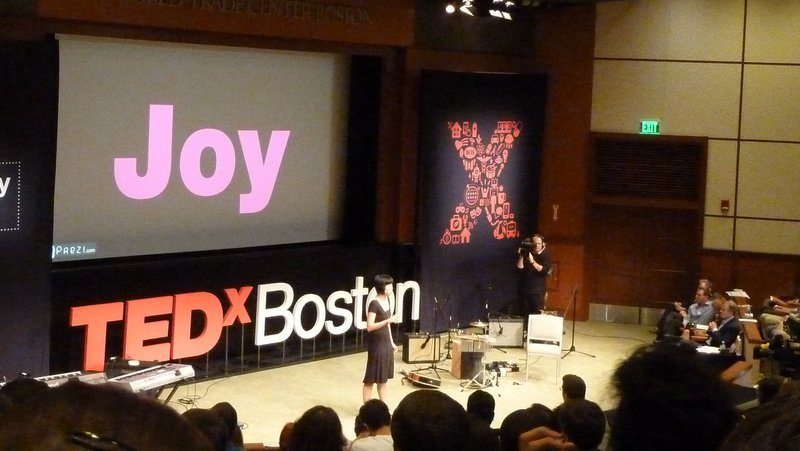 Christina said that without their focus on Joy, the Awesome foundation would only be the "really small and efficient" foundation (I think her actual quote was more clever, but you get the jist.) 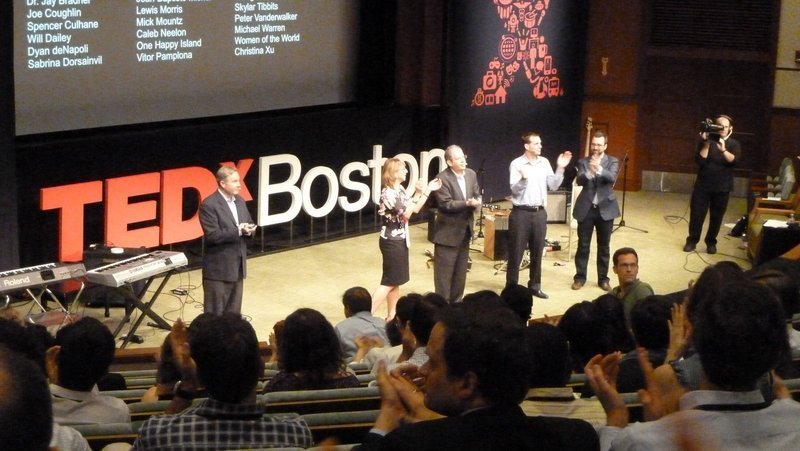 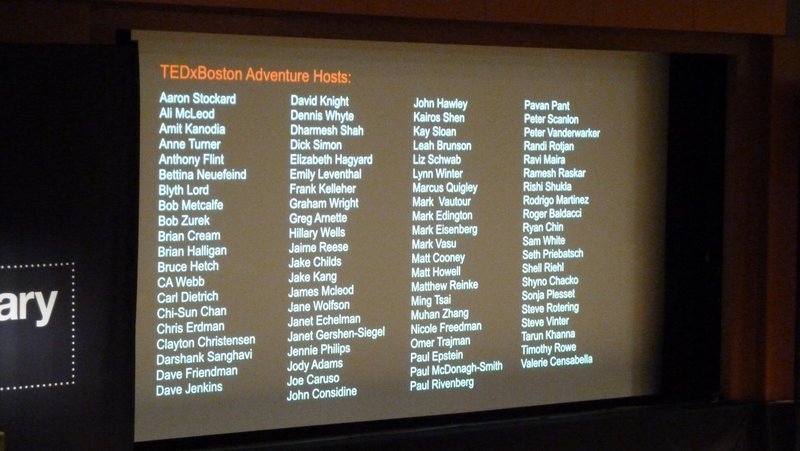 There were many slides like this thanking volunteers and organizers. It was a huge undertaking. 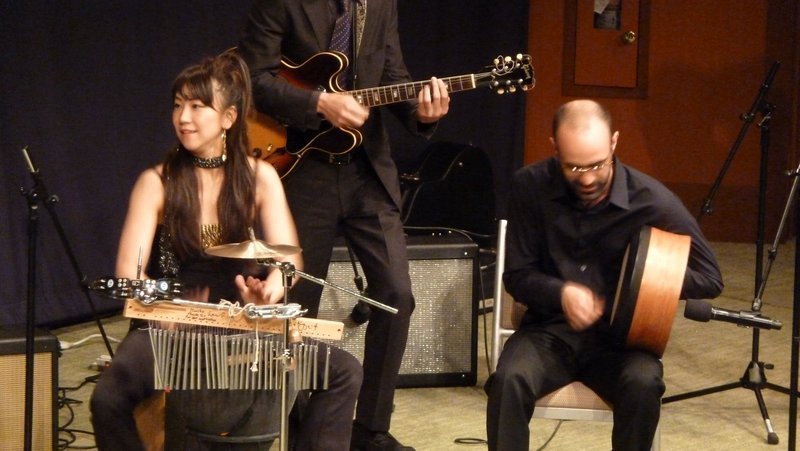 The band "Women of the World" closed the show with two songs and completed the energy of a great day. 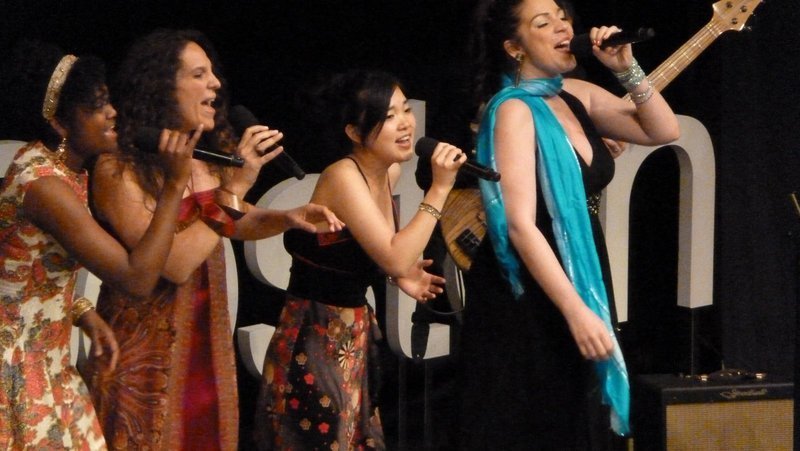 Four singers from Women of the World. 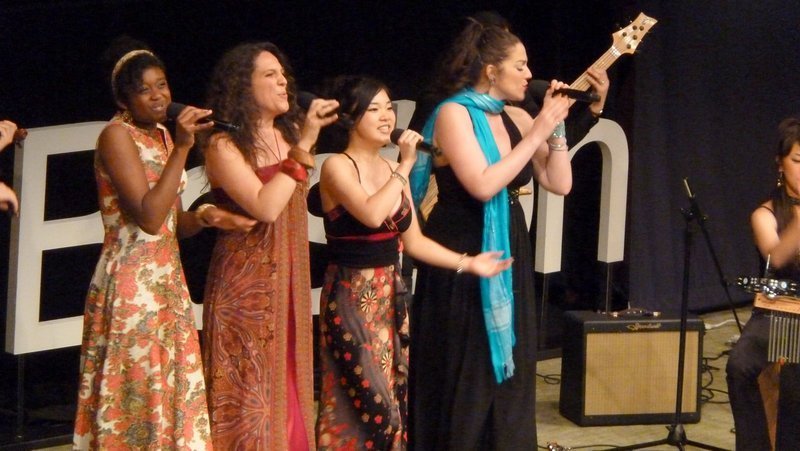 Women of the World. 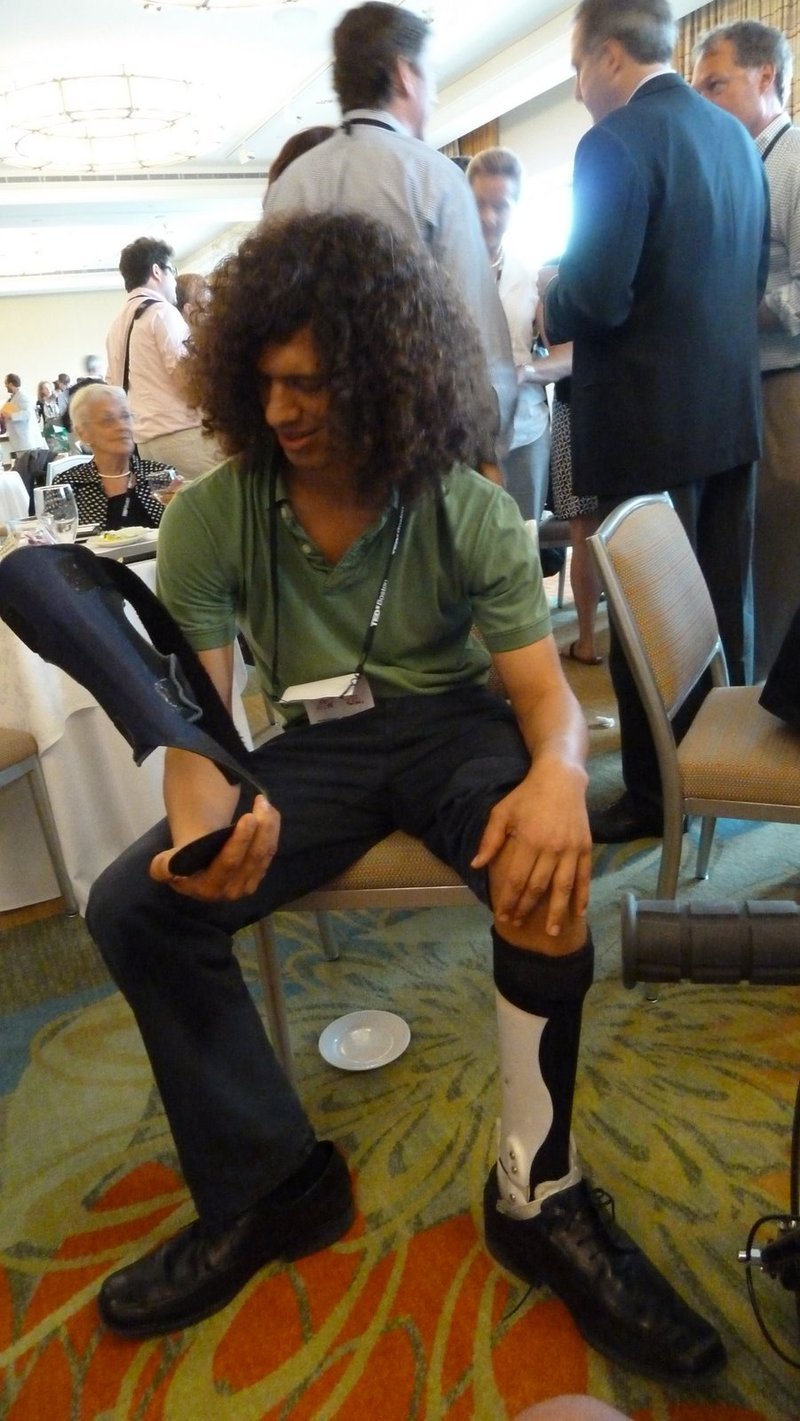 At the reception a young man asked me about my braces, which are made in Sweden and use carbon fiber and fiberglass. He marveled at the light weight. 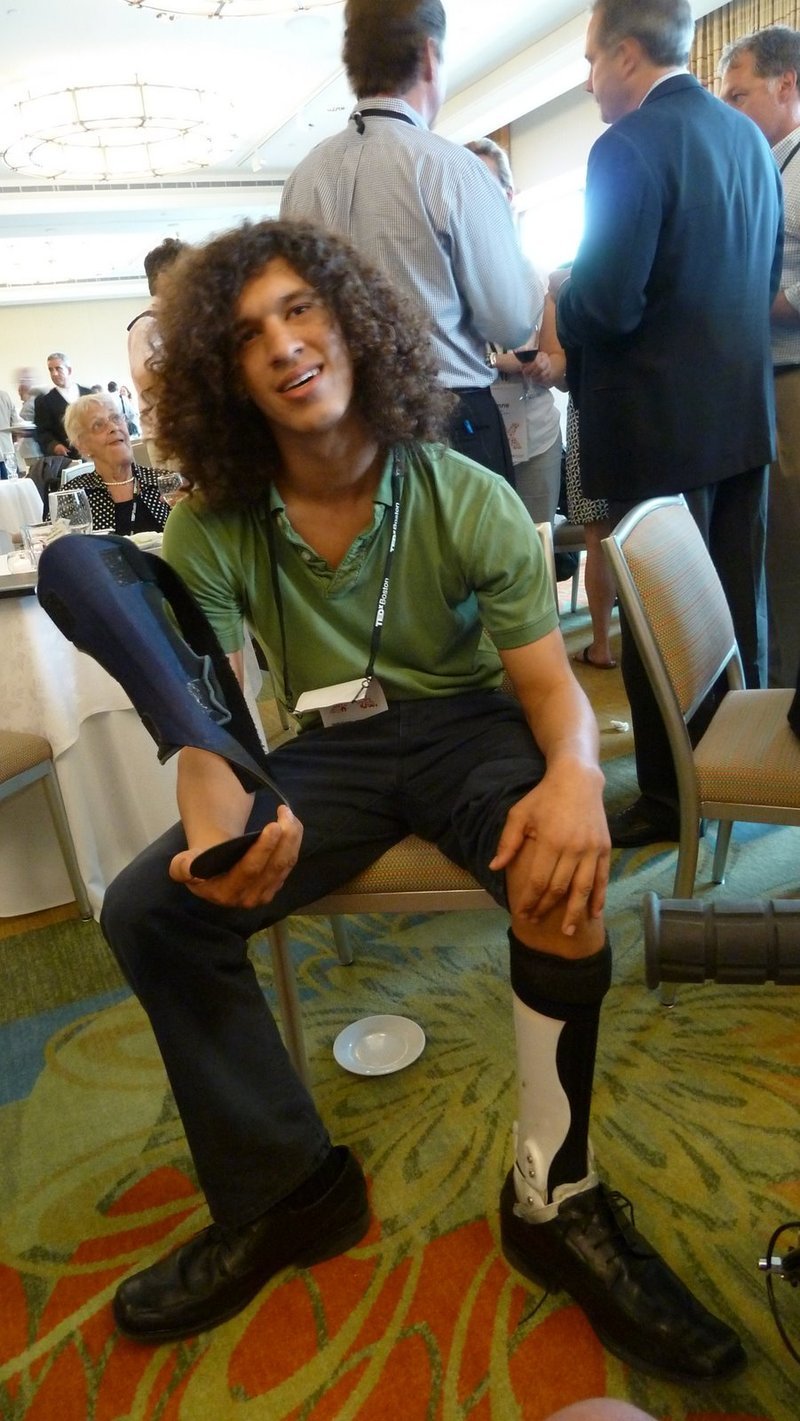 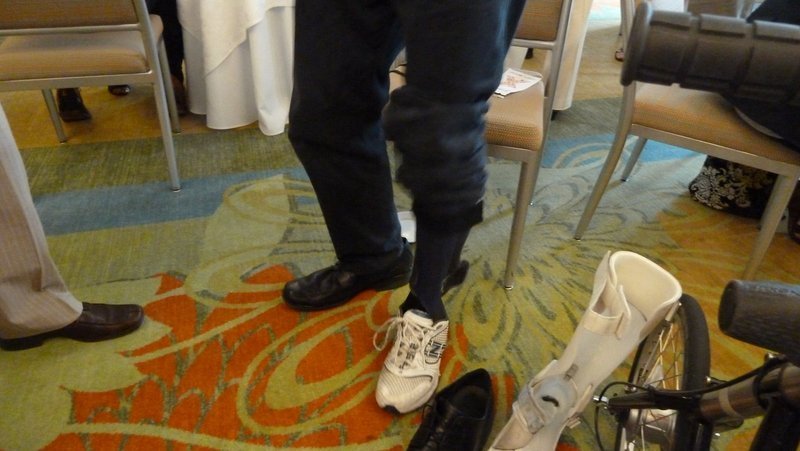 He did, and it was fun to see what a difference some new technology can make. (And with the kind of brace I use called the "Blue Rocker" from Camp Scandanavia, he could wear regular sneakers) 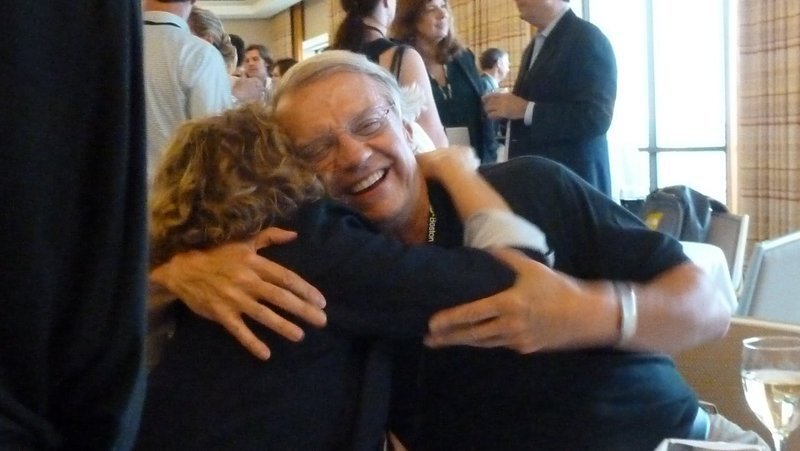 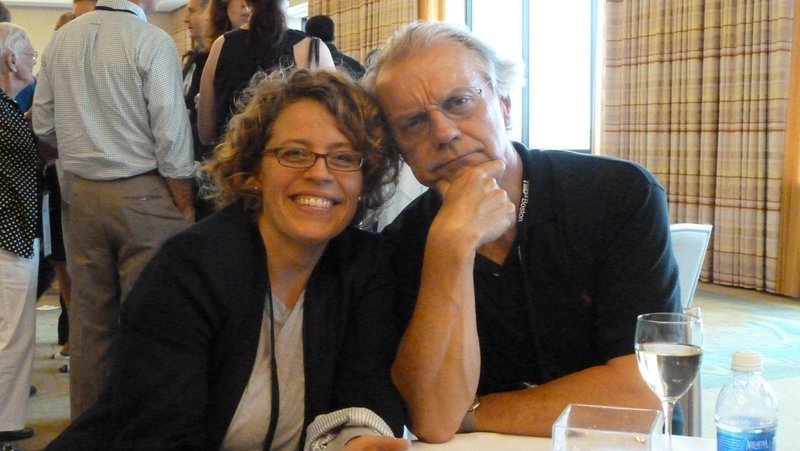 But moments later, John was much more serious. (okay, he was trying to look serious.) 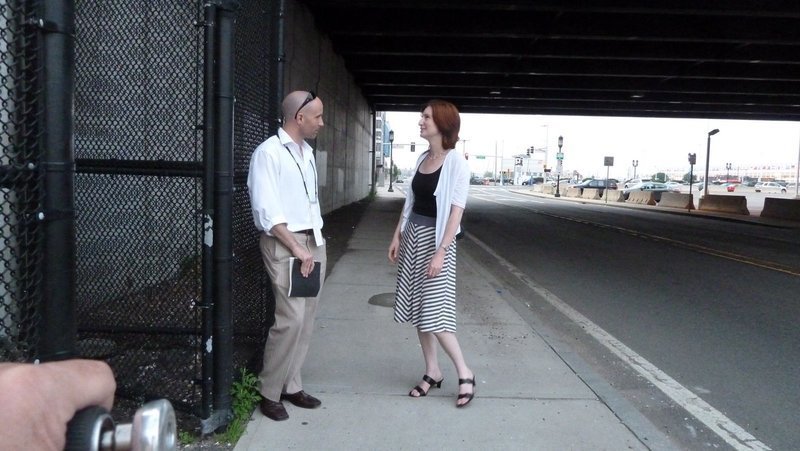 Four of us took a field trip to see nearby Greentown clean energy labs. Here Jason Hanna talks with Carrie Stalder at the overpass that provides just the right industrial lead-in to their 14,000 sq foot facility. 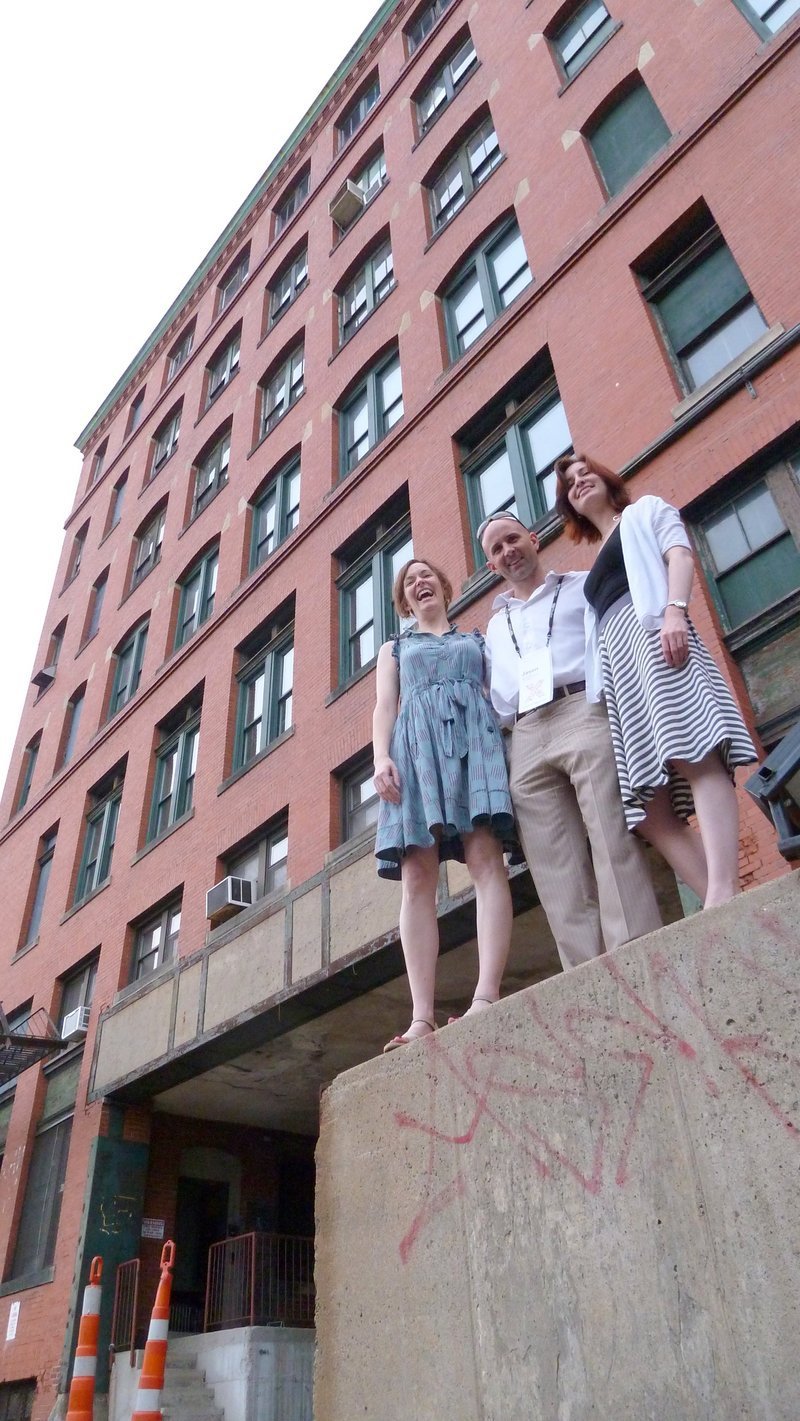 C.A., Jason, and Carrie stand on the loading dock at Greentown. 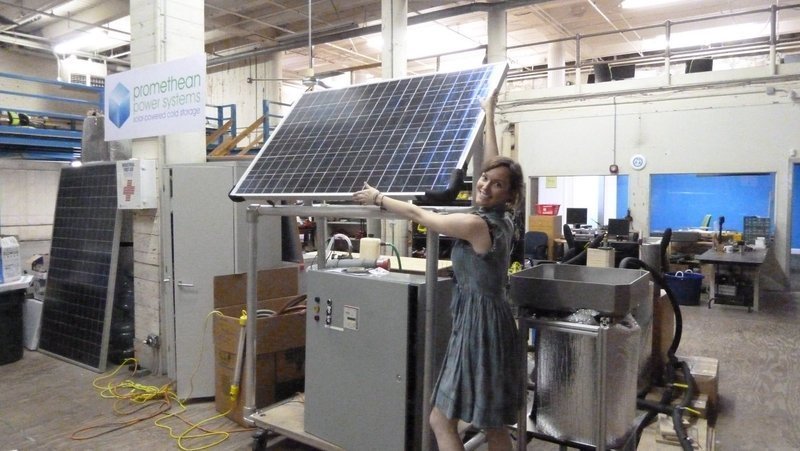 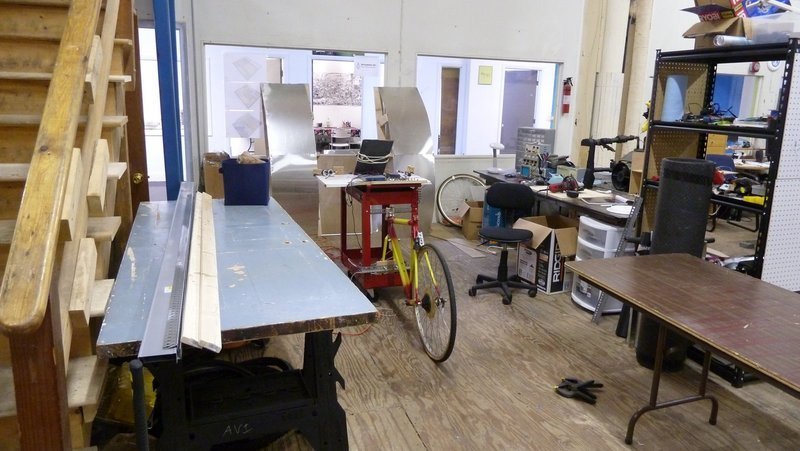 Another bay at Greentown. 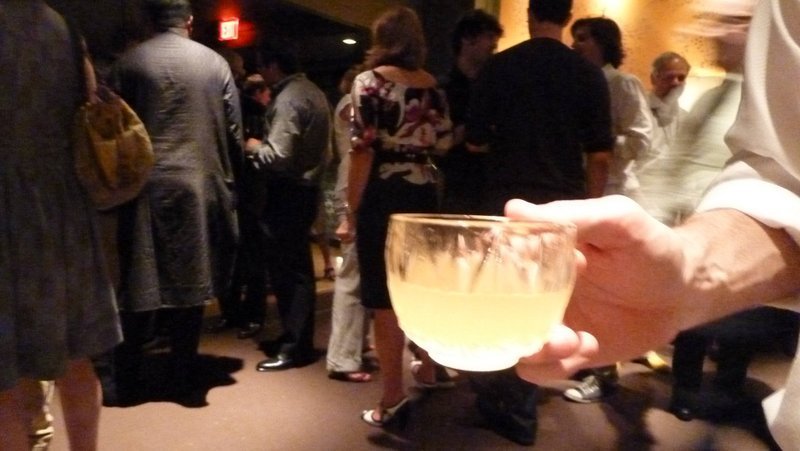 The evening ended with a wonderful party at Barbara Lynch's Sportello restaurant. Seen here is one of the drink concoctions. I'm told it was very sweet. A nice way to wrap the day!