As an engineer, I'm fascinated with our ability to create inventions of great power and scope. The Saturn 5 rocket and the moon landings. Giant airplanes like the Boeing 747 or the Airbus A380. In a more down-to-earth realm, things like highways and bridges. I'm also endlessly fascinated by the design of cities - which I believe to be mankind's most complex and enduring invention.

In this post, I'll look at three bad uses of engineering -- two that did happen - the demolition of Boston's West End, and Boston’s Central Artery and one that did not - the Inner Belt Highway that would have gone through Cambridge, Somerville and Brookline. 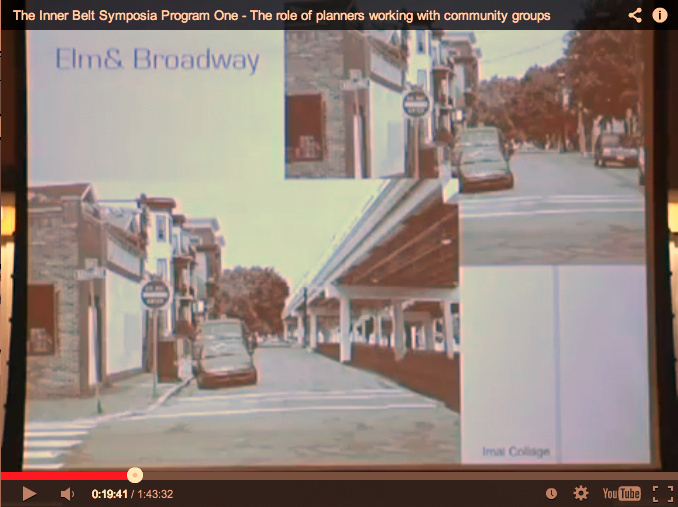 You can view the 1962 planned route interactively here. We seamed together all the DOT plans into a single overlay. Zoom in to see details of exactly how the highway would have affected each area. On the lower right of the viewer, you can change the background map to see the highway against current and past maps. 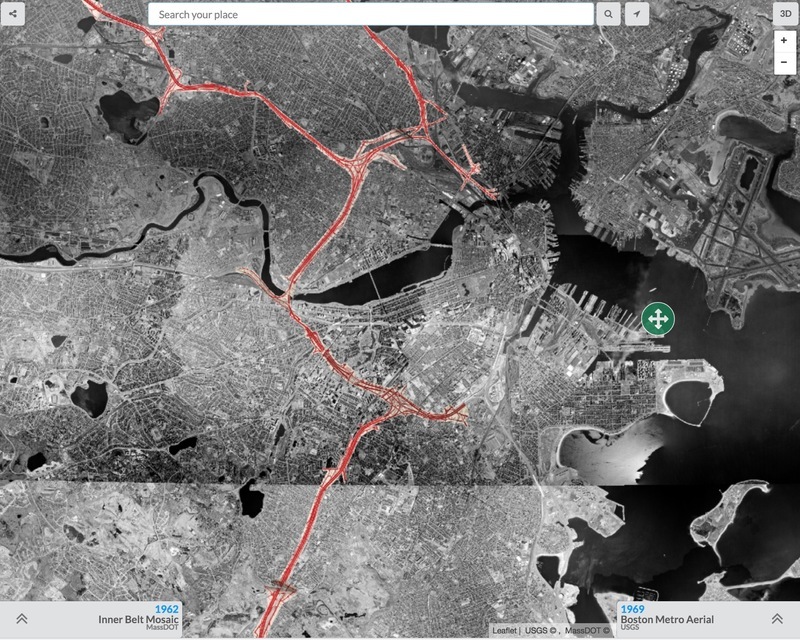 This rendering shows the Inner Belt (I-695) as it would have passed down Elm Street at Broadway in Cambridge. After a huge community organizing effort, the Inner Belt was cancelled. Click here to view this video, which was taken at the Inner Belt Symposia in April 2012, sponsored by The Cambridge Historical Society and MIT. 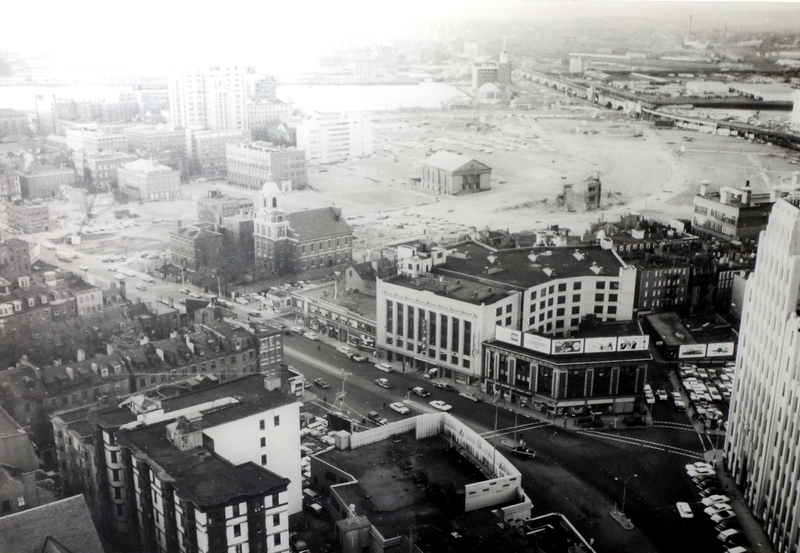 The West End of Boston was demolished in 1958 to 1960 as part of Urban Renewal. The new land made way for suburban-style apartments (“If You Lived Here, You’d Be Home Now) and for Government Center. 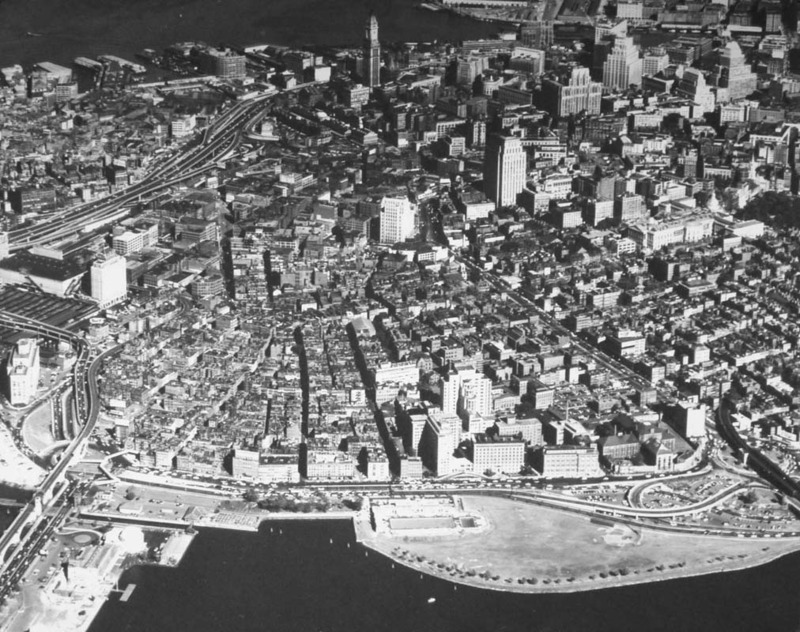 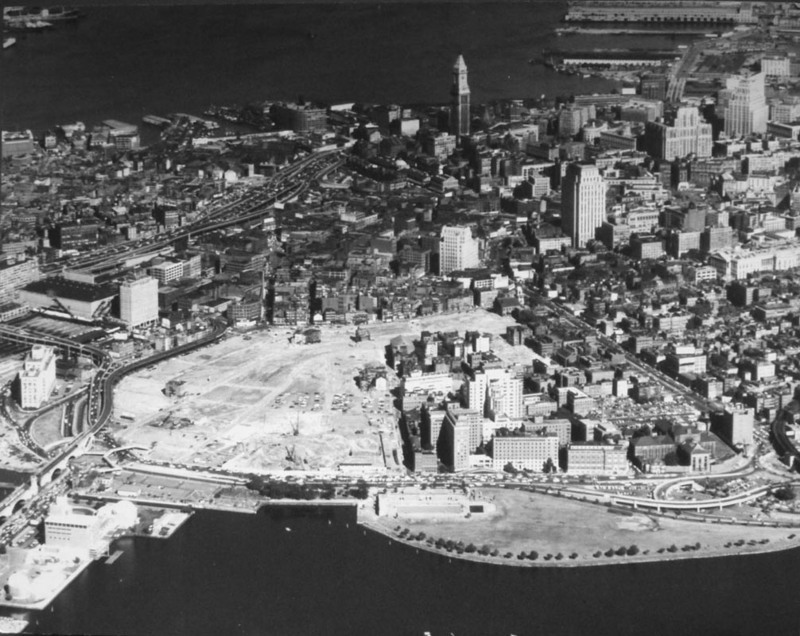 The West End after demolition began. Amazingly, this photo doesn’t show the full extent of the removal, since the many of the buildings taken for Government Center are still standing.  Lowery Aerial Photos/West End Museum 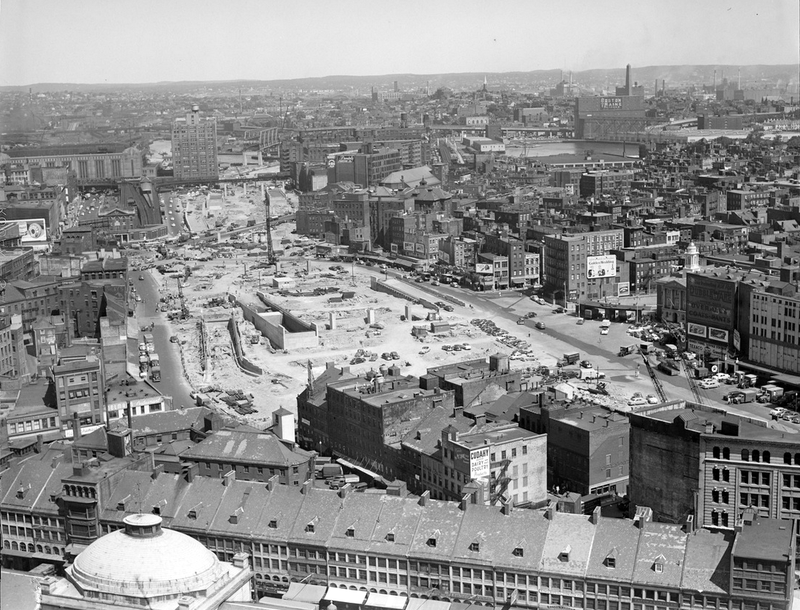 This 1953 photo shows the initial construction of the Central Artery highway in Boston, Over 1000 buildings were cleared to make way for the highway. Later, in a feat of engineering prowess, the elevated highway was removed by the Big Dig and placed underground. Photo - Boston Public Library 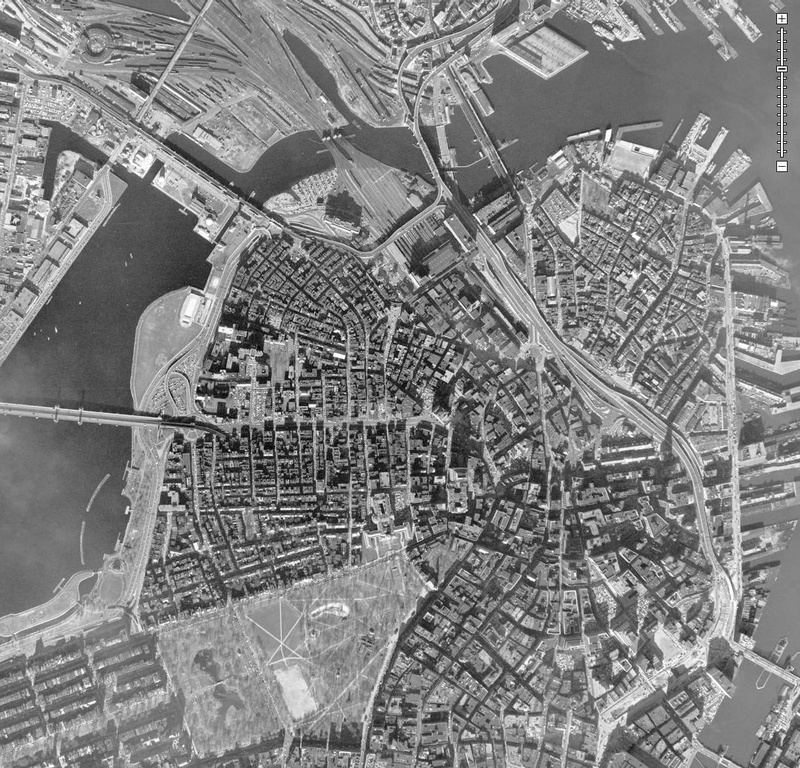 This 1955 USGS aerial photo shows Boston after the Central Artery was built but not opened. Note the construction on the lower right near South Station. 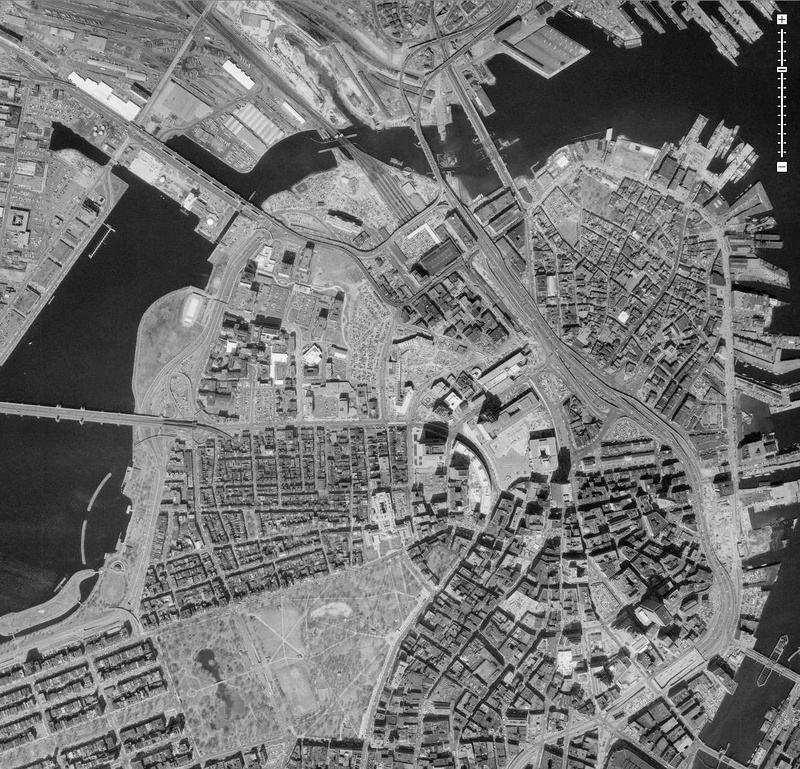 This USGS aerial photo from 1969 shows City Hall and Government Center under construction, and also shows the new apartments in the West End. Note that the area that was reconstructed is easily larger than the entire North End.

As Spider-man was told: "With great power comes great responsibility." I think this is very true of engineering, and it leads me to celebrate when things are done well, and to want to understand the opposite -- when engineering goes awry. I love to understand engineering disasters and what led to them. Usually, the problem isn't with direct engineering errors -- although the Hubble Space Telescope did need eyeglasses delivered to it simply because of a calculation error. Usually the problem relates to the overall environment in which the engineering work being done. It might even be unfair to use the term "engineering disaster" in some of these cases - For example, the Shuttle Challenger crashed when it was launched at a temperature way below its true design parameters.

In the 1950's, cities were in trouble. People were moving to the suburbs. The car was taking over as the main means of transportation. The idea of Urban Renewal began to take hold after World War II, and the concept was to completely demolish parts of inner cities and start over. Federal money was allocated for this purpose, and in Boston, the West End --  a neighborhood of brick buildings just across Cambridge Street from Beacon Hill -- was torn down.
Also, highways were seen as one antidote to urban problems. Get more cars into the urban core, even if the people lived in the suburbs, and the city would recover its activity. Boston was performing this experiment on itself with at the same time with the construction of the Central Artery (see photo below from 1953). The highway opened in 1959, just as the bulldozers were in full swing at the West End.
Meanwhile, across the river, more demolition and highway construction was planned. It was all part of a vast and detailed plan for Boston's new highway system. I find that you get the best sense of the times when you can see original documents. An online archive called www.archive.org has some beautiful scans of the documents involved in this drama. 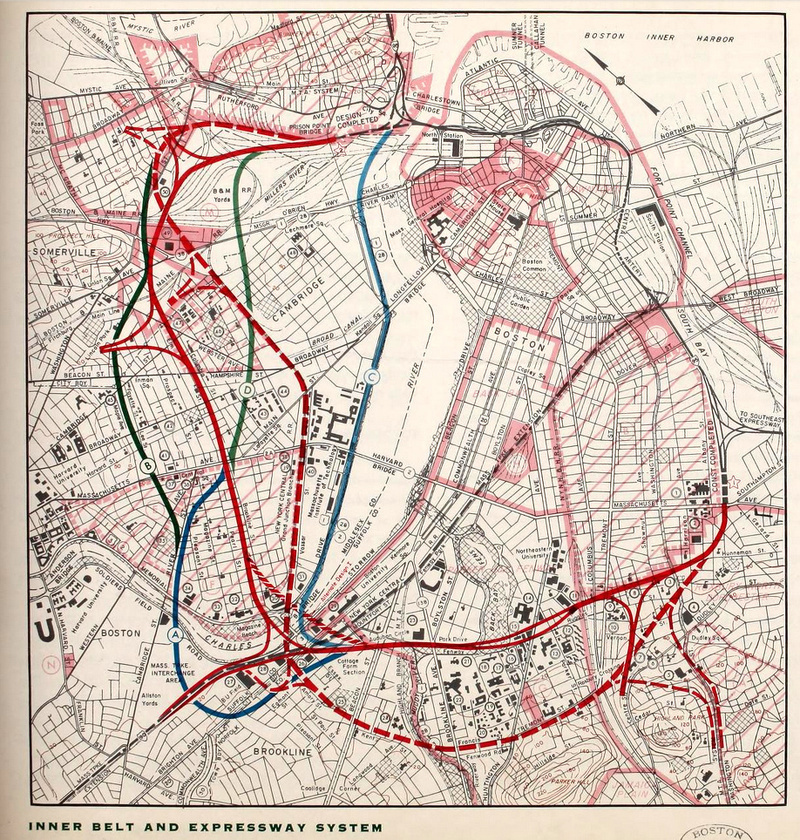 Four proposed routes through Cambridge and two through Brookline are outlined in this illustration from the Inner Belt and Expressway System: Boston Metropolitan Area (1962). The routes through Cambridge caused the most controversy and generated the most vocal opposition. This eventually led to the cancellation of the Inner Belt.
Importantly - look at the pink shaded areas. These were all areas in the planning stages for Urban Renewal. Given that the thinking was to tear down whole portions of a city, it wasn't so hard to think of inserting an elevated highway through the same area.

Note that the West End area is shown in the darkest pink. "The Execution Stage". Truly. 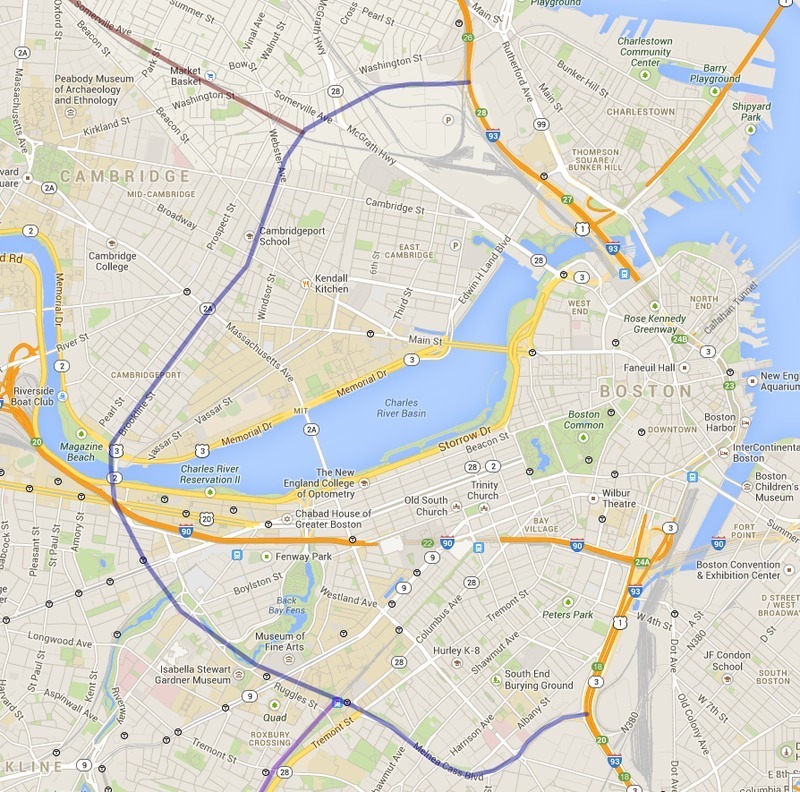 This Google Map shows the proposed path of the Inner Belt (and other unbuilt highways, including Route 3 and the Southwest Expressway) Click here to view on Google Maps. Source: User "BigRock" on Google Maps.

Ever since I learned about the Inner Belt, I wondered exactly what was the planned route? What buildings would have been taken? Where would it have crossed Mass Ave? How would it have gotten through Brookline? With the advent of the original documents on archive.org, and from other newer sources,  I was able to find that out in great detail.
In a horror movie, the bad guy hides in the shadows, waiting to strike. In the this case, the horror story of bulldozers demolishing key parts of Cambridge, Somerville and Brookline didn't happen. But it almost did. And I plan to show you some of the "crime scenes" that never happened.

The highway story begins with the 1948 Master Highway Plan that details a whole range of highways, some that were built, and many that were later cancelled. This 206 page document contains a wealth of drawings and illustrations, as well as traffic studies that of course make the case for the new highways. 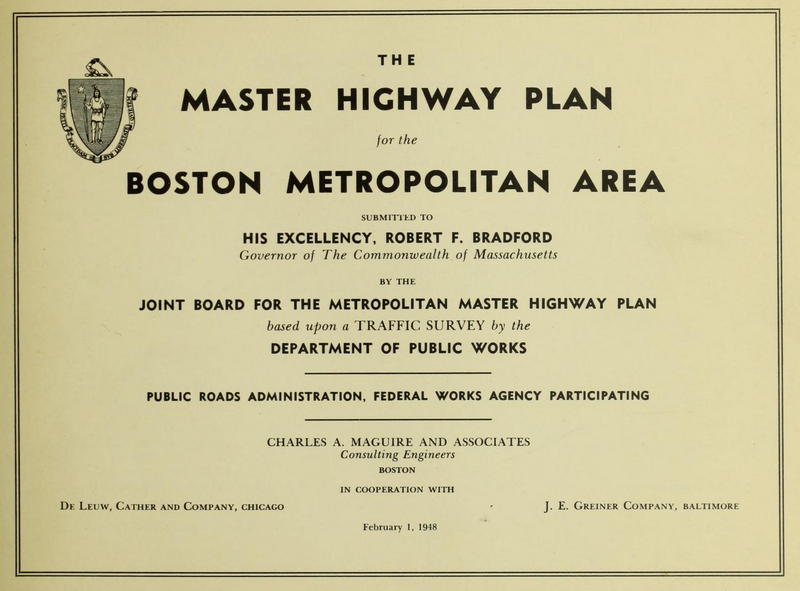 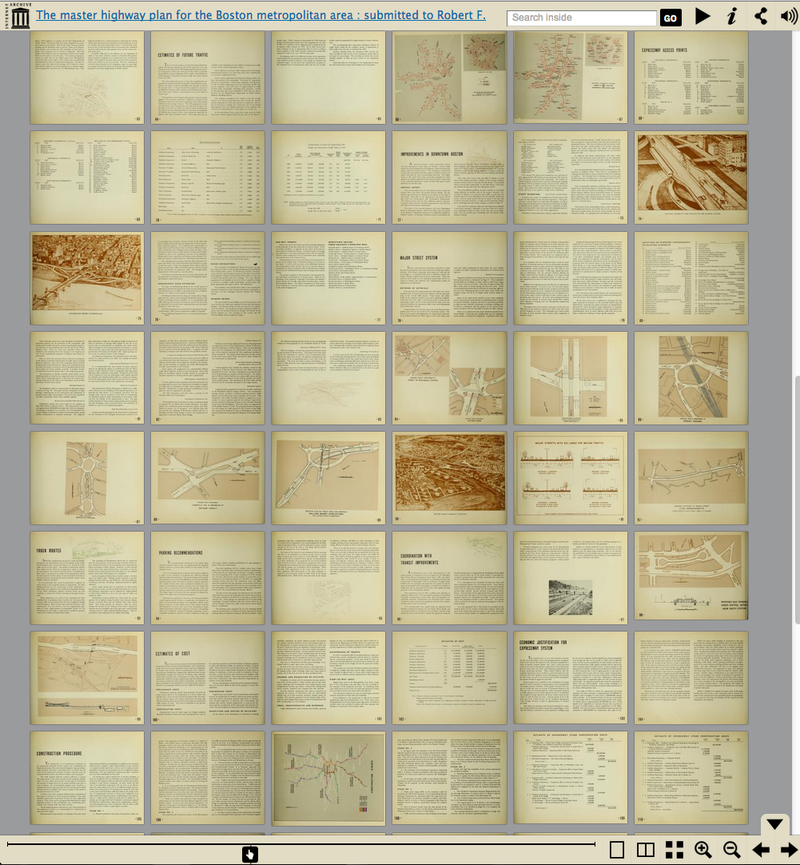 Archive.org provides a nice thumbnail view of these large documents, so you can quickly find what you're looking for. Click here to see the 1948 Plan online. It’s worth looking at to get a detailed sense of how highway planners were thinking in 1948. 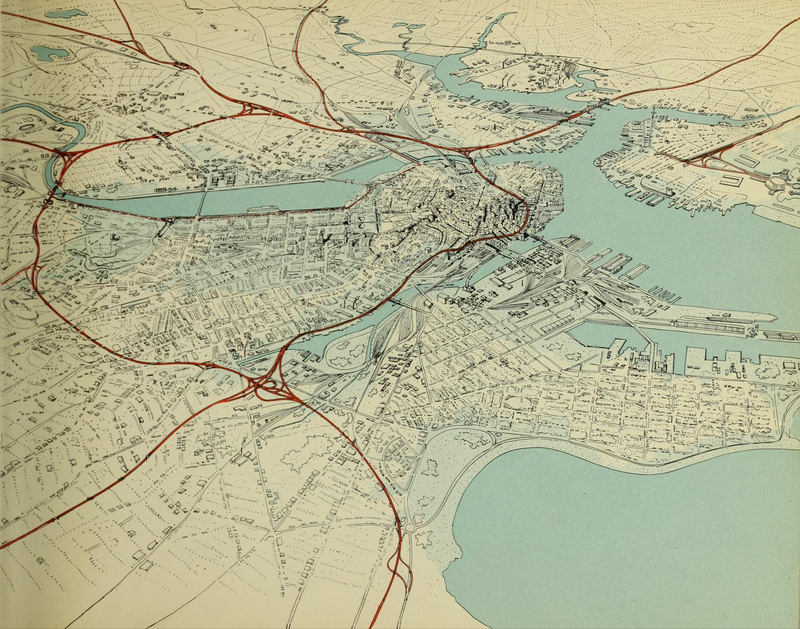 This map from the 1948 Master Highway Plan shows an early routing of the Inner Belt. It was changed in many ways later, but the basic idea remained the same. Notice how the city itself seems to be a willing canvas for innocent red lines. Notice Cambridge -- which seems to have only a few buildings, as if the highways would pass through farm land rather than an intensely built urban area.
Fourteen years later, in 1962, The Massachusetts Department of Public Works released a detailed plan for the new Inner Belt and Expressway System. This document has all the detailed routing plans that lets us find out exactly where the highway would have gone. While many battles would ensue about the routing, it seems that the DPW stuck pretty much to the 1962 routing, all the way up to the cancellation of the Inner Belt in 1971. 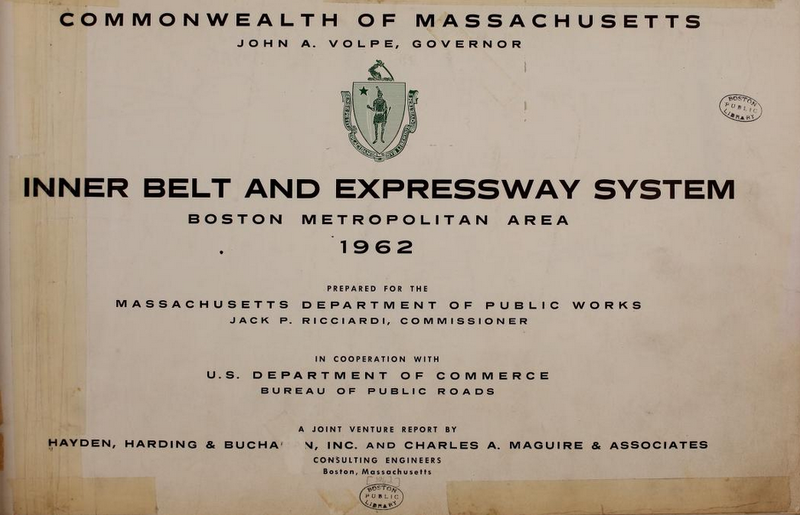 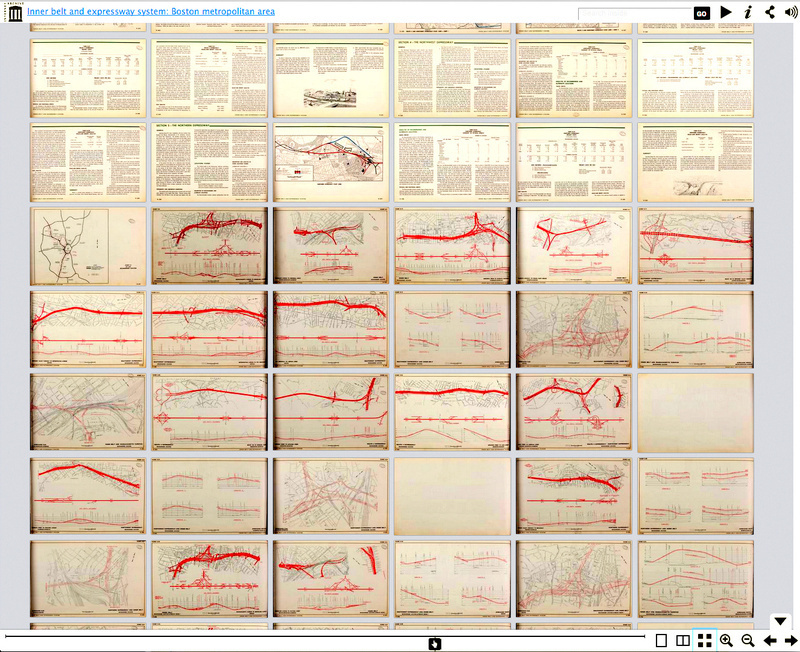 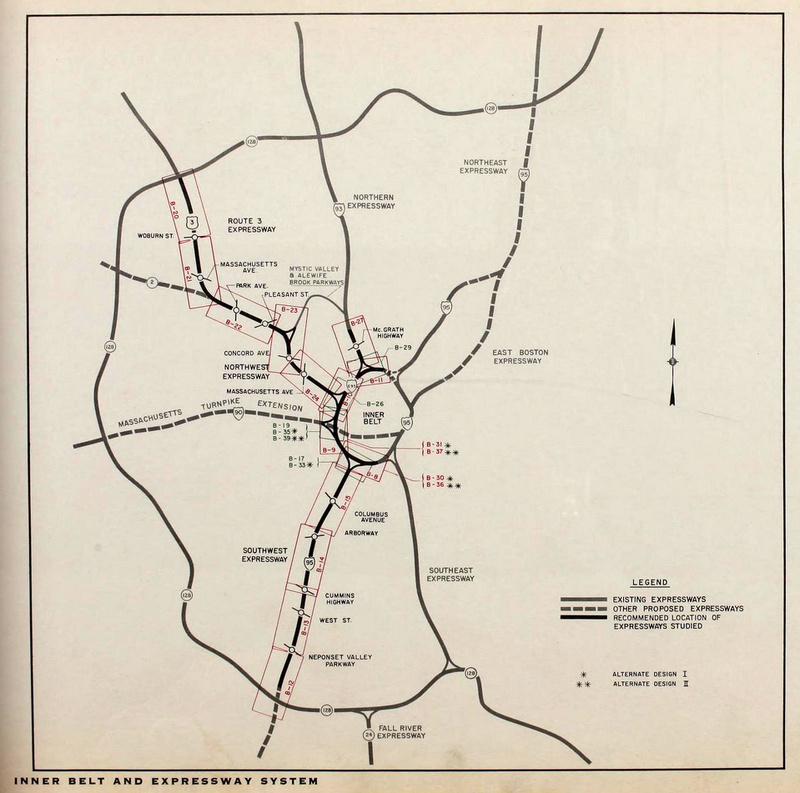 This reference map from the 1962 Plan is particularly useful. It shows the detailed plans for each part of new highway system. For example, Maps B-11 and B-10 cover most of Somerville and Cambridge, while B-9 covers Brookline and B-8 covers Boston and Roxbury. Note that of the areas shown with red boxes -- those designed in this plan -- almost all were cancelled. Route 3 from 128 never connected to Route 2 as shown. Route 2 did not continue to the Inner Belt, as Map B-24 had planned.  The Mass Turnpike Extension was later built. So was the extension of the Mass Pike to Logan Airport as part of the Big Dig. The Southwest Expressway was cancelled as well, and part of its routing is now the Orange Line. 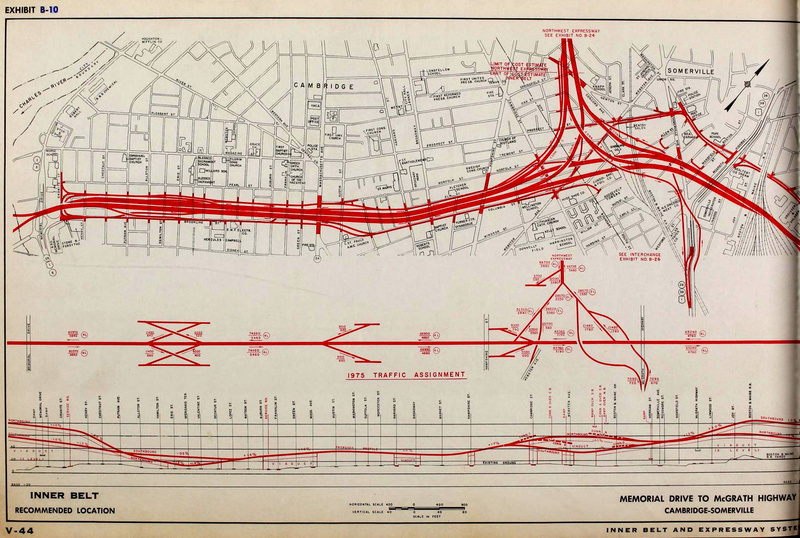 Map B-10 Shows the 1962 planned route through Cambridge. Look at the massive interchange that would have occurred where the full length of Route 2 connected to the Inner Belt. 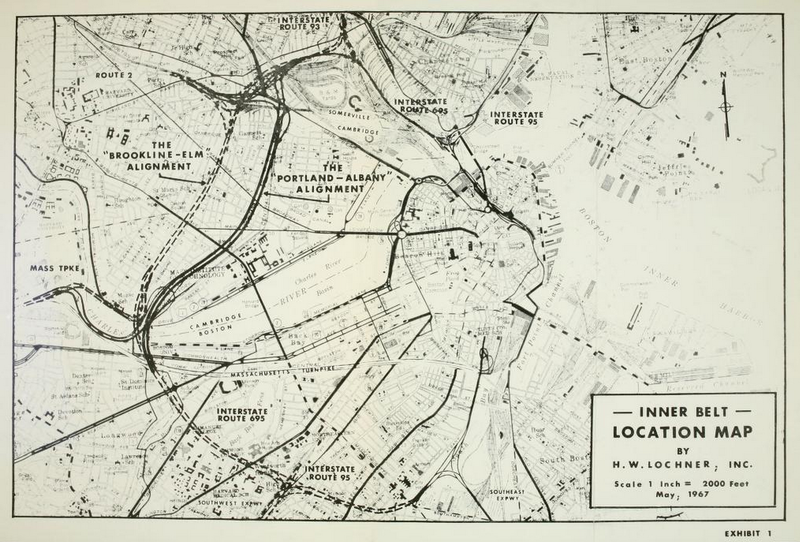 By 1966, a new route for the highway was being proposed by a group called the Cambridge Comission. It avoided the path through Cambridgeport, and instead went closer to MIT, following the train tracks near Albany Street. In this 1967 Location Restudy by the Mass DPW, a detailed analysis of the proposed route and road designs are offered. Mass DPW finds the Portland-Albany alignment consistently unacceptable and makes it case that the Brookline-Elm alignment is best. It claimed that some sections would require a 12' thick concrete slab to avoid the floatation of the roadway due to high water table. And the route would have gone right through Tech Square, which had just started construction. 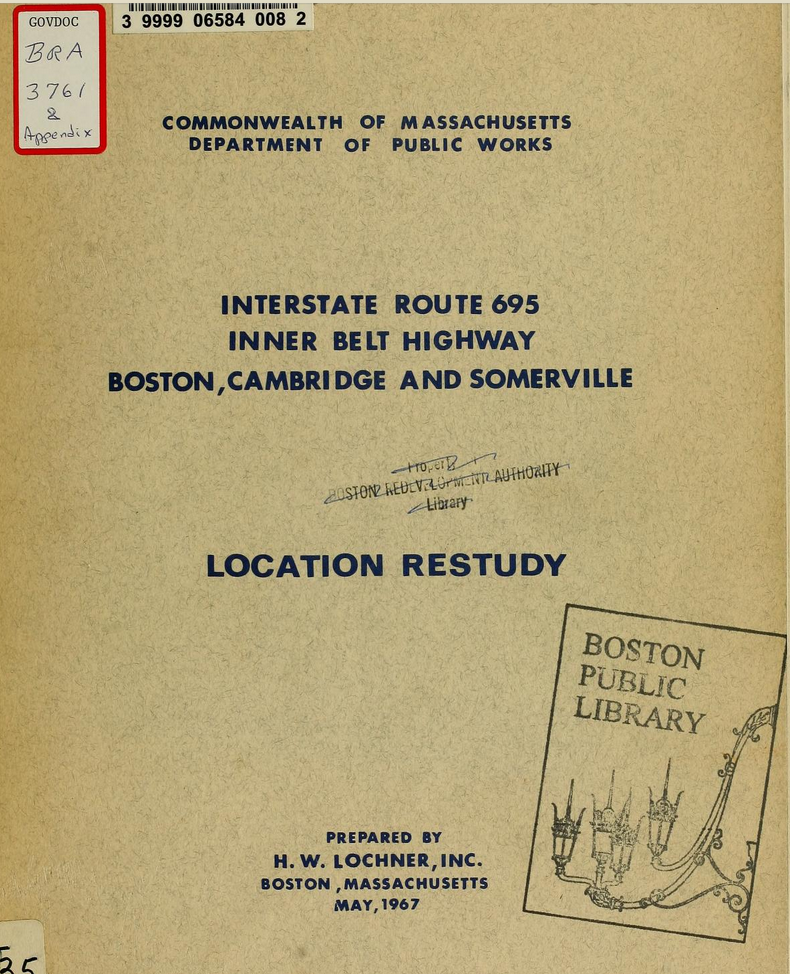 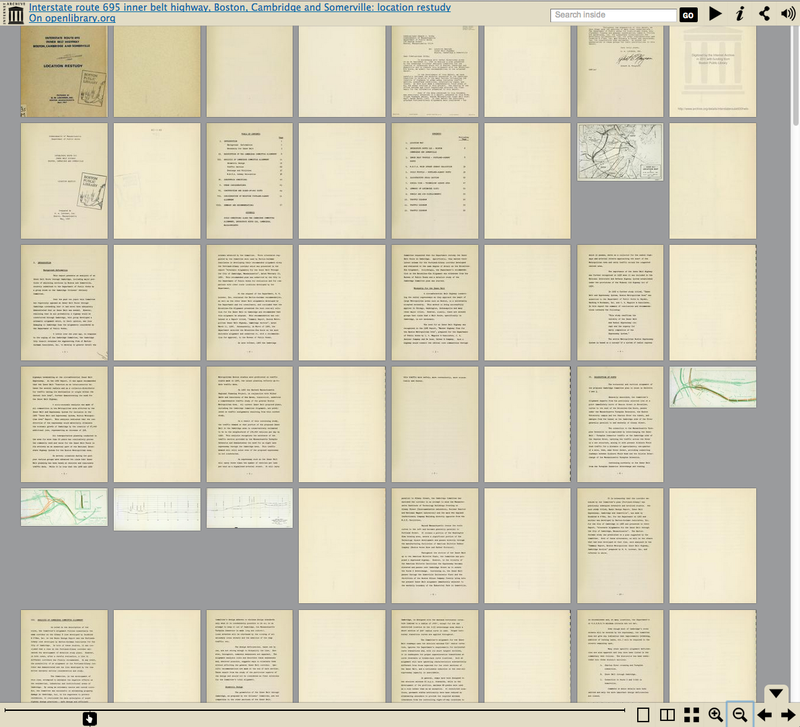 This 1967 Location Restudy  sought to move the highway out of route through Brookline St in Cambridgeport. The suggestions here were later roundly rejected by Mass DPW. 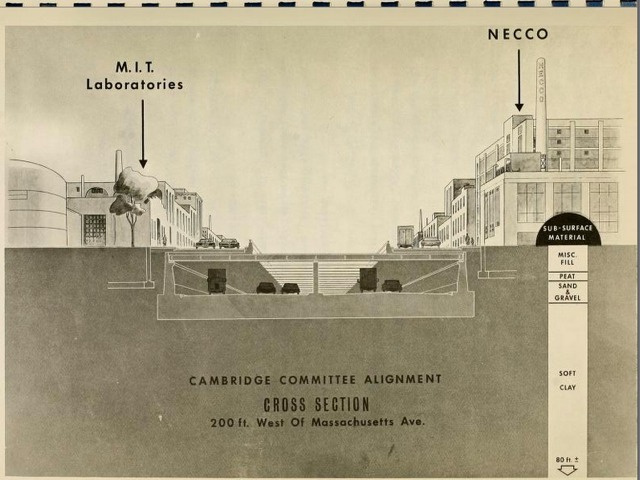 The 1967 Relocation Study offered to put the highway in a depression (not a tunnel) that would pass along MIT. 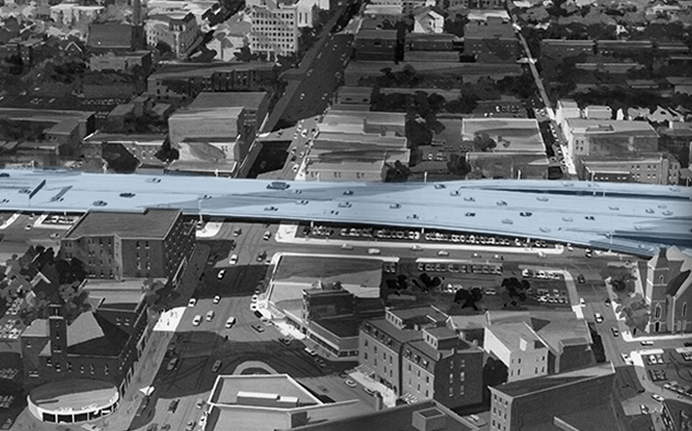 Here's the routing of the Inner Belt from the 1962 plan. A giant elevated highway crosses at Mass Ave, and continues down Brookline Street. From the Cambridge Historical Society website. 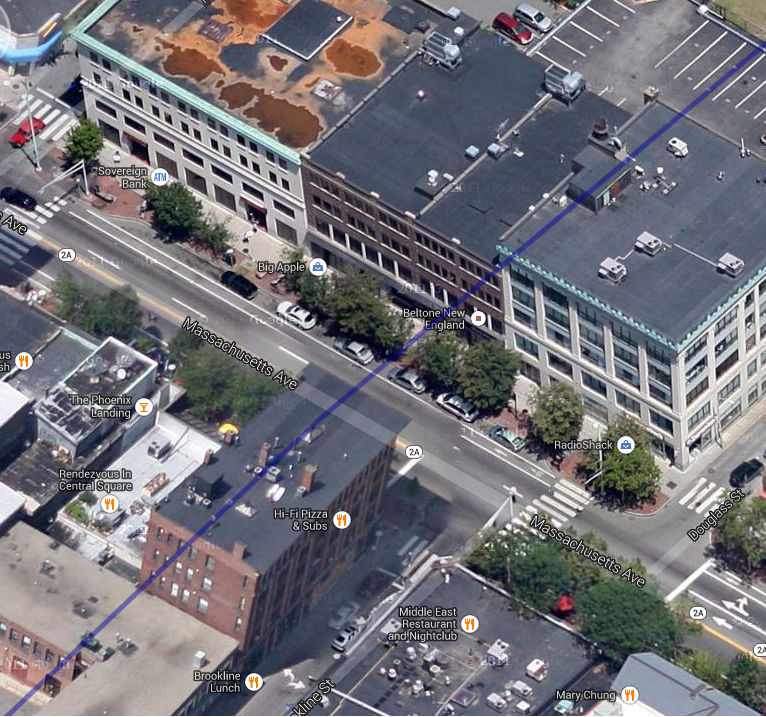 The highway would have taken down a number of buildings in Central Square, including the building housing Hi-FI Pizza, as shown on this Google Map 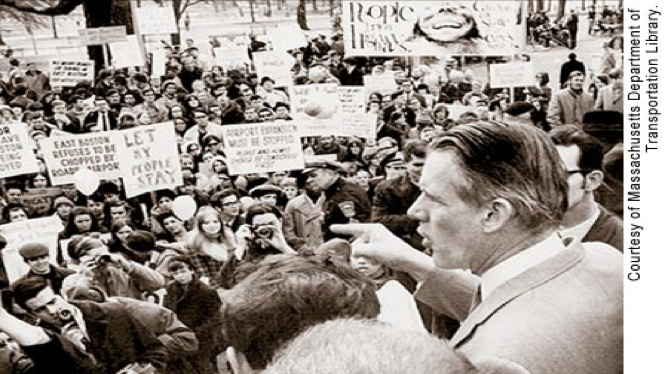 Governor Francis Sargent began to take up the cause of those who wished to stop the highway. He created the Boston Transportation Planning Review (BTPR) in 1970. Their report became the model for what we now know as the Environmental Impact Report. On December 29, 1971, Governor Sargent gave a speech from prepared remarks about the State's approach to highways and mass transit, and in that speech, he made it clear that the Inner Belt was dead. He even used those words. The text below can found in the BTPR's final report from 1973

The Governor's comments on the Inner Belt were straightforward and direct. "The much discussed Brookline-Elm and Portland-Albany Street alignments are now officially dead." Without the path through Cambridge, there could be no Inner Belt.

This mural in Cambridge commemorates the citizen action taken to stop the Inner Belt.
As bad as the West End demolition was, I believe that actually building the Inner Belt would have been much worse. It would have dramatically changed the fabric of our inner city. It would have divided neighborhoods and it would have routed high speed traffic right through city areas. The original Central Artery did much the same damage, and I believe it is a testimony to our region that we were able to fix that mistake via the Big Dig and do it in a way that improved the city.

A future post will cover the path of the Inner Belt in detail, and will look at many more sources of maps and other visuals to illustrate where the Inner Belt would have been built, and what it would have looked like. Was the Inner Belt a monster that lurked just outside your door? Find out next time.